I'm often asked what inspires the names of the yarn bases that I use, so I thought i'd give you guys a quick rundown of the named and current base line up for Third Vault Yarns.

I try to pick base names that embody the yarn's qualities whilst also staying true to TVY's Sci Fi and Fantasy leanings, mostly because I'm a big geek and it's fun.

Interstellar is a gorgeous, squishable soft base with fun sparkles, it's a non superwash extra fine merino and silk blend yarn that is perfect for shawls and light weight tops. Named because the subtle and sometime bold sparkles from the stellina reminiscent of stars, and the rest is but situated between.

This gorgeous silky yarn, has both glow and lustre created by the high percentage silk and the fantastic crispness and richness of Bluefaced Leicester wool this luxury yarn represents the glowing richness of the Tesseract from the Marvel Universe, the Infinity Stone containment vessel.

The Sock Weights and Long Haulers

This base is named in a nod to a one of my favourite Sci fi's and a certain Firefly class ship mechanic, Kaylee. Who embodies both hardiness and prettiness. This mechanic is just as at home in a dress and baubles as she is with a screwdriver and wrench in hand. Which is the perfect fit for this hard-wearing yarn that is perfect for socks with it's lovely juxtaposition of softness and strength.

As an avid book lover, I’ve always thought of Librarians as gatekeepers to the gates of wonder and magic. Keepers of history, knowledge and imagination. These sturdy, stable bastions of culture and learning are ideal to represent this Blue Faced Leicester, nylon blend sock weight yarn which has wonderful strength and character. Perfect for making socks to snuggle up in on those cold nights or the workhorse socks for a long day out.

It's a common theme in Sci Fi and fantasy for the protagonist to have one or two trusty companions, this fabulous superwash merino yarn is the perfect base to come with you on your knitting journeys providing strength and softness. So it's named in tribute to all the companions throughout the galaxy, travelling in time and space, through the black, respectable or otherwise, be fearless knitters, go on I dare you!

This dual natured 50/50 Merino and Silk yarn brings both drape and softness to the table. It was named with a view to it's dual nature and inspired by the seal people of myth and folklore, the Selkie. They often make appearances in fantasy tv shows such as Lost girl and I felt that the hypnotic duality of these creatures perfectly embodied this cool and warm glowing yarn.

The Great All Rounders

It's no secret that i'm a big fan of Joss whedon's sci fi works, so when I was thinking of a name for this soft, bouncy, washable, versatile base, I thought of Echo. A kickass active played by Eliza Dushku in dollhouse. The versatility of this year makes it ideal to become anything, just like and active. So choose what imprint(pattern) you want to mold it into and don't forget Echo will bring her own oomph to make your project extra special.

A fantastic replacement for Echo dk it's a springy soft superwash merino dk yarn with 230m/ 115g so you get a bit more out of every skein. It has great stitch definition and is incredibly versitile. So it's been named after Echo but differently with Echo's name before she was wiped and became an active.

Jayne in One Skein

The name just says it all, this cake of squishy goodness, is for those most cunning amongst us, with a love of shiny, shiny things. Another base named and designed with a nod at my favourite Sci fi. This yarn and base is specifically dyed and measured out to use with the Jayne in One Skein pattern to knit your very own Ma Cobb hat. Though in the same vein, don't be a afraid to knit anything you wish!

This shares the same name as the 4ply base of the same fibre blend so see selkie 4ply for why I named it this way. Selkie Dk actually came first, but the 50/50 merino silk was so popular the 4ply version made an appearance and has made itself well and truly at home.

Sinaya is also named after a Norbear from the Liaden universe. Norbears are said to be fearless with a lively dispostion and natural empaths. They are sharing creatures that are warm and comforting, just like this yarn with the merino and cashmere lending incredibly warmth and cuddlyness and the nylon giving it that strength of character. You can't help but want to wrap yourself in this yarn, there is nothing like to gorgeous squishyness to make you feel extra comfortable, so the name was really a no brainer.

Space and Time are Sister bases, both the same weight and put up at 3plys. However they differ in wool type. With Space a 100% Merino Base and Time 100% Blue Face Leicester. Named thus as space and time are key features in Science Fiction stories and in Tv shows I know and love such as Dr Who. With these two bases all of Space and Time is open to you :P

Is named after a Nanny Ogg, from the Discworld Series. She is a loveable and much liked character, to all but her many daughters in law (Which is said by many to be her only failing). This warm welcoming fully figured mother and witch embodies this yarn, It's ridiculous softness and ability to take colour, along with it's good wearing qualities, make it the perfect yarn, for something next to the skin soft or to wrap you up in warmth as a jumper, it's almost magical ;D. This superwash Falklands merino yarn is specially spun for Third Vault Yarns, hand sourced in the Falklands, treated and spun in the UK. 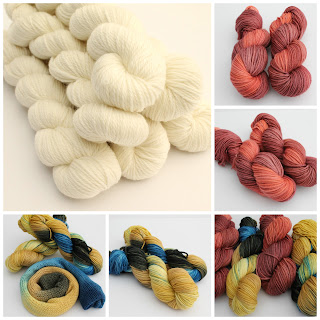